Vesica Pisces is Derived from the Intersection of Two Circles


The shape of the Vesica Pisces is derived from the intersection of two circles, the Pythagorean "measure of the fish" that was a mystical symbol of the intersection of the world of the divine with the world of matter and the beginning of creation. The Vesica Pisces is used in a wide range of symbolism:
1. The joining of God and Goddess
2. A symbol for Jesus Christ
3. The vagina of the female goddess
4. The basic motif in the Flower of Life
5. An overlay of the Tree of Life
6. A geometrical description of square roots and harmonic proportions

The Vesica Pisces pendant is a description of the Cherubim which were set upon the Ark of the Covenant. The Cherubim are holding the Vesica Pisces. On one side of the pendant appears the Hebrew word "Tohu Va Vohu" and on the other side "eheye asher eheye".

Let's take the first line of the book of Genesis:
"Bereshit bara elohim et hashamaim veet haaretz vehaaretz haita tohu va vohu vechoshech al pney tehom"  - which means - "In the beginning God created the heaven and the earth. And the earth was without form, and void; and darkness was upon the face of the deep."

The old testament states that in the beginning, God created the earth and the sky and that the earth was "TOHU VA VOHU" (darkness upon the void). The Hebrew word "TOHU VA VOHU" was seen by most people as chaos, a lack of any order. However, it is written that the land was darkness upon the void. In other words, an empty space, a void, nothingness - and nothingness cannot be in a state of disorder! The solution to the meaning of the word is hidden in the word itself and its sound. Repeat the word "TOHU VA VOHU" - it's a sound that repeats itself - "movement then rest". When we start to examine what matter is made of we get to molecules and then to atoms. Atoms are composed of particles moving around each other at great speed. When scientists searched for what these particles are made of they found various wave lengths (frequencies).


Movement and rest - a vibration

The simplest way to understand a vibration is to imagine constantly repeating "movement" and "rest". The human ear can hear 30 to 16000 vibrations ("movement" and "rest") per second. In fact, everything is made of frequencies, even the "matter" we previously mentioned.

The first letters of "Tohu Va Vohu" creates the Hebrew word "TAV" - a musical note. These letters also create the initials of "TENOOAA VEMENOOCHA" (Movement and rest translation to Hebrew). 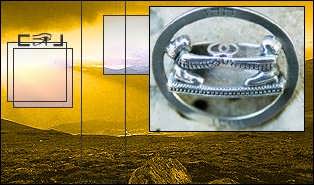 Another interesting thing that I've discovered is that the remaining letters that are the gap between the "Tav" and the "Vav" create the number 12 which is the number of notes in the musical scale, while the word "Tav" creates the 13th number which is the great void between the different harmonies. Therefore, all that exists including our self is made from frequency. That is the reason that God speaks (creates a sound) during the creation process, "Vayomer" - "God said". That is the reason we call the things that surround us "Dvarim" meaning "things", from the Hebrew word "deebur" meaning to speak, and the word "dvarim" which means "things that were spoken".

The next hint concerning "who or what I am?" comes from the story of Moses who walked in the desert where he saw the burning bush. In those days people believed that a person's name reflected his nature - and Moses who wanted to know the true nature of the One God, asked his name and God answered "eheye asher eheye" - the true translation of this sentence is "I am becoming what I am becoming". Moses totally understood God's answer but because he knew that the children of Israel would not understand the depth of God's answer he asked - "when the children of Israel will ask me for the name of the God that sent me what should I tell them?" God answered Moses and said - tell them that "eheye" sent you!

God's answers have also been distorted over time and their significance have been changed and forgotten. God simply said to Moses: my name is "I am becoming what I am becoming" tell the children of Israel - "that which will become" sent you. The traditional English translation distorted the original true meaning of the Hebrew writing because it was translated incorrectly to "I am that I am". Now, since you are surrounded by "things" what is the only thing in creation that is certain? The answer is CHANGE. Nothing stays in the same state forever. "The only thing that is constant in life is change". Everything that exists changes and is in motion. If the frequency that governs all will stop then all that exists would disappear and creation would stop.

The God or the force that created all does not have a name. He is a frequency that is constantly evolving and changing therefore he is "becoming" and has no form or definition. The meanings of one of God's Hebrew "names" - "YEHOVA" can be translated as I AM BECOMING or I AM IN A "BECOMING" PROCESS - TAKING A FORM.


God is within us all

The jewelry that we create symbolizes the geometric patterns that are created by the various wave lengths of the one frequency. This frequency also wears your image - you are God in a specific level of development. Throughout history there were individuals who came to the realization that they are God. Some were crucified, tortured and persecuted. Those who come from the darkness hide the truth or hid nature from man for their own power, because when man finds the One within himself there is no longer a need for external teachers or guidance.

The cosmic joke is that many religious people have no belief at all in the existence of God because they believe in the external (superficial) and thereby take all responsibility for their own lives off themselves.

All is one leads to unconditional love because YOU ARE GOD AND THEREFORE ALL THE ANSWERS AND THE UNDERSTANDING ARE TO BE FOUND WITHIN YOURSELF. That is the reason for the concept of "unconditional love" - when we hate someone we hate ourselves because all - everything and everyone is the one God.

People who do spiritual activities and connect themselves consciously to the one frequency will often experience other individuals' thoughts and emotions or perhaps if they are enlightened, they will experience the entire universe when their individual artificial consciousness merges with the One.


The world of lies - Maya

The old testament forbids the practice of external "channeling" and foretelling the future (which are very common among the "new age people"). The reason for this is that the person who looks for external answers "betrays" the true God within. That is one of the reasons the external world is called in ancient Aramaic in Judaism "ALMA DE SHIKRA" - THE WORLD OF LIES and "Maya" which means "illusion" in the Hindu tradition.

The concept of the frequency that governs all, exists in all cultures starting with the "TOHU VA VOHU" in the old testament or the "OM" - the sound, the frequency that created everything (O-M, movement and rest, a frequency).The Tibetans create their beautiful Mandalas from colored sand and if you'll take a metal plate and cover it with sand and make it vibrate with different sounds you will be able to see different structures that are formed in the sand, that are very similar to the sand Mandalas. In the end, after a few weeks when the Mandala is finished, they simply wipe the sand off Mandala to show the non attachment to the illusion of the external, and also to show the constant change and the process of life and death that takes place in the external world of illusion.

Movement and Rest in Egyptian writing

In 1949, ancient writings were found in Egypt at Nag Hammadi - known as the Nag Hamadi scriptures. These writings contain the teachings of Yeshua - Jesus. In one of the parts, Jesus told his disciples that the SIGN OF THE FATHER (GOD) IS WITHIN THEM. Then he asked "and when they will ask what is the sign of thy father within you tell them it is MOVEMENT AND REST".

Sad and Touching Customer Story about the Vesica Pisces Pendant

"Hi David, My wife Meirav was born with a rare disease called scleroderma. The disease damaged her kidneys and five years ago, she had a kidney transplant. A year ago, the planted kidney stopped functioning and Meiravi became dependant on oxygen machine.  On October 12 2009, Meiravi died and she was only 37 year old. Meiravi wore one pendant on her neck. She told me few details about the person who made it and requested to continue wearing it even when she was with a dialyze machine. She told me that when she will feel better we would go and get one for me. A little while before she died she requested to put the pendant on her again (it was taken off because of all the machines). After she died, Meiravi's mother asked for the pendant and I gave it to her. I searched for the pendant for days and night without success. I thought it was named something with Cherubim (because there are two holding from the sides). It was very important for me to reach the 30 memorial with the pendant. On Friday, four days before the memorial, I searched again using Google images. I reached pages 8-9 and 10 and nothing. I stopped and asked from Meiravi to help me to find it. The next click, I suddenly saw the pendant. I clicked on it and it lead me to Your website. The artist was found and the pendant that symbolized our life more then anything was found… tears went down and the heart was broken, even while writing these words. On Tuesday, when I will visit her grave, I will whisper to her that I found the pendant and will carry it with me all time… Thank you"
Lior 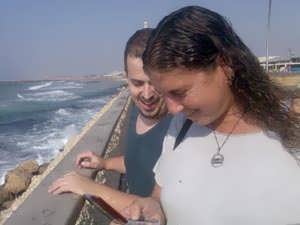 Dedicated with Love to Meiravi...