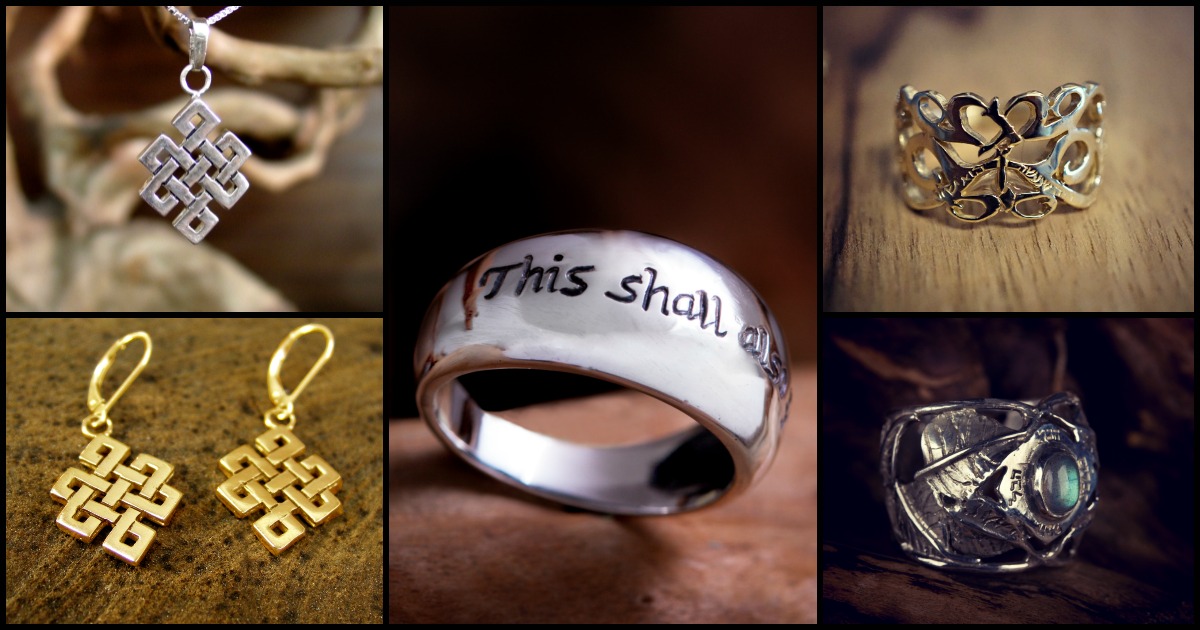 We like to share with you several designs that hold enlightening meaning that can help in seeing reality in a better perspective. The designs are inspired by Buddhist wisdom and the wise King Solomon.

This will also Change

The two designs are tied with a story that originated in Buddhism. The tale is about two brothers who lived in their father’s mansion. The father was a wealthy man and when his time came, both his sons inherited his fortune.

The sons divided the estate equally between them. After the division, the younger of the two brothers found a small bag in a closet, in it were two rings. One ring was a precious gold ring embedded with a diamond; the other was a simple silver ring. When the young brother showed the rings to his elder, the elder said that since he was the first to be born he should have the more valuable ring. The younger brother agreed and so it was. When the younger brother reached his home he saw that there was an inscription on his silver ring, it stated: “This too shall change”. The time of the year was spring and the brothers were with high spirits. The following summer also brought with it joyous moments to both brothers. As autumn set in, the elder brother slipped into melancholy.

Utterly senseless, everything is senseless!

Around the stone in the inlaid Buddhi ring, there is a sentence in Hebrew – “Utterly senseless, everything is senseless!” taken from the book of Ecclesiastes written by King Solomon. Many Buddhists note the similarity between the message contained in Ecclesiastes and the essential themes that run through Buddhist philosophy. Both Buddha and King Solomon related to life as “Maya” – Illusory or Senseless.

Some may see this sentence as a form of despair. We see it differently. It is actually a realization that let you become free and light-hearted. It lets you play the game of life in a much more joyous and balanced way.

Cause and effect – Tibetan Knot

Tibetan knot (Srivatsa or the endless knot) and is one of the eight symbols of Tibetan Buddhism. The Tibetan knot can stand for karmic consequences: pull here, something happens over there. It is an apt symbol for the Vajrayana methods: Often when we tug at one part of a knot while trying to loosen it, another part gets tighter. You have to work with the knot to get it to come undone. In its endless configuration, it evokes the cyclic nature of rebirth and also calls karmic connections to mind.

The Tibetan knot brings very special wisdom into the wearer’s life. It is connected in some way to Newton’s third law – for every action, there is an equal and opposite reaction. That is part of the meaning of “Working with the Knot”. One can also connect it to the concept of Wu Wei concept (effortless action) where we try to work with the natural forces of nature to bring harmony.