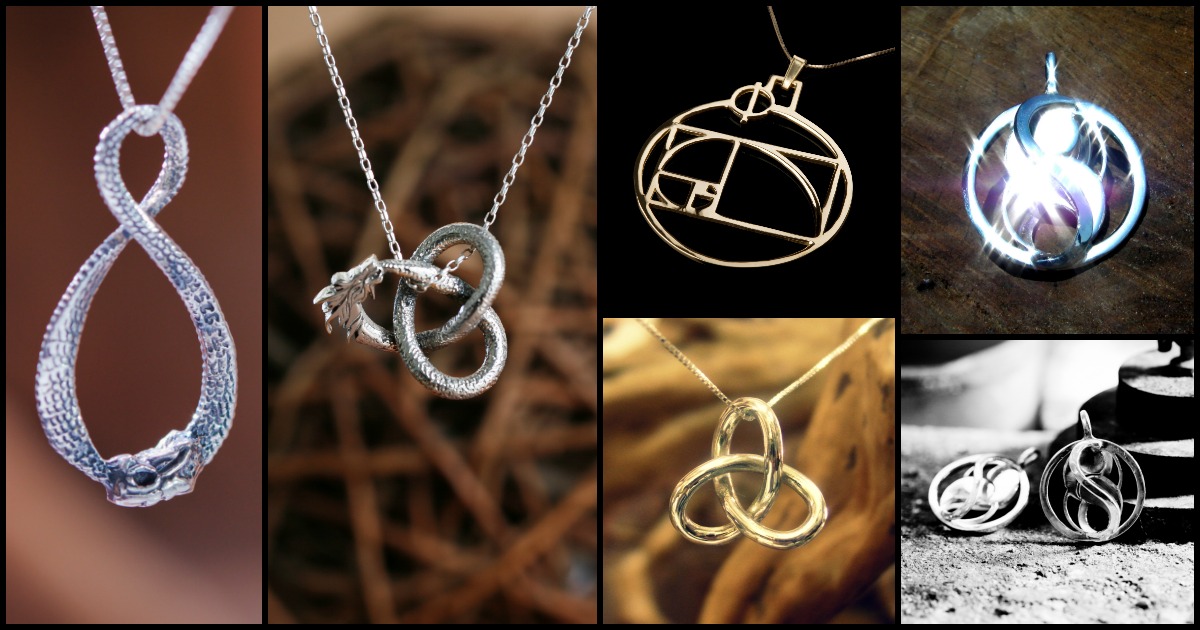 Infinity is one of the most intriguing and hard to grasp concepts in math, science and spirituality. The infinity concept appears in several of David’s jewelry designs as a means to expand consciousness beyond the limitation of our thoughts.

One may argue that it is impossible for humans to imagine infinity. We can understand it mathematically but mathematics is an invented language to represent our world. Try it yourself right now and you will experience the problem with it. As if our mind is not designed to grasp infinity and also the other side of the coin which is nothingness. Maybe we cannot imagine it because infinity is the opposite of imagination. Infinity can be experienced only in a ‘thoughtless’ mind. One may experience infinity through the practice of meditation. But then they will be left unable to “explain it” with words and thoughts and just trying to do so will cause it to vanish…

The Infinity Dragon pendant is the symbol of the Ouroboros. The Ouroborus symbolizes on a personal level the ability to create ourselves a new and to inspire us to make long-lasting changes in our lives. On the cosmic level, it is the symbol of the universe itself that creates itself a new from itself, or as Stephen Hawking says – The force of gravity that allows, in fact, the universe to create itself a new infinitely.

The entangled pendant is designed by Judy Hilton and Pat Crelly and created by the artist David Weitzman. The infinity symbol in this pendant ‘works’ together with other known symbols like the Yin Yang, DNA structure, Vesica Pisces, Electromagnetic waves and synergy. The pendant is made to symbolize the connection between two souls and infinite love.

Phi is a constant value that is even more mysterious and profound in its implications than Pi (3.14…). Like pi, phi is a number with no arithmetical solution – The decimals just keep on going to infinity without ever repeating themselves. The unique thing about this number is that it can be found incorporated in all known organic structures: From the bone structure of human beings; through the seed pattern of a sunflower; to the spiral of a sea shell, the phi proportion is there, underlying all biological structures, seeming to be a geometrical blueprint for life itself.

The Gordian knot is based on a torus tube that is basically a structure of a donut or a sphere that turns into itself from one side and comes out the other in perpetual motion. In a spiritual aspect, it symbolizes the cosmos, as well as infinity and it correlates to other structures of Sacred Geometry. This Infinity jewelry design comes in three sizes and also a different version with called dragon pendant.

This pendant does not directly contain the infinity symbol but the concepts behind it are very much related to infinity. The engraving on one side features the biblical words “Tohu Vavohoo” from the first chapter and the first verse in the book of Genesis The Hebrew word “TOHU VA VOHU” was seen by most people as chaos, but it might as well mean “sound, thought or vibration” just like the “Om” concept.

The engraving on the other side is one of the Hebrew names of God as it was given to Moses during the revelation of the burning bush – “Eheye asher eheye” which literally means “I am becoming what I am becoming”. It’s a fascinating concept that simply states – I’m reality and existence itself, which is CHANGE. it’s interesting since the sacred name of God in Hebrew, the Tetragrammaton, the four letters name – Y.H.V.H – Yehova is actually a combination of the words “Haya, Hove, and Yiheeye” that’s Hebrew for was, is and will be. Past, present and future as ONE EXISTENCE and ONE CONSCIOUSNESS.